Could George have made it anywhere? 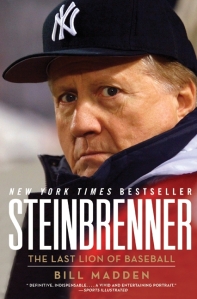 Excellent article by Joe Nocera from The New York Times about George Steinbrenner’s business affairs. “Would Mr. Steinbrenner have been as successful if he had owned his hometown Indians rather than the storied New York Yankees? Or was his success due mainly to the fact that he just happened to buy the No. 1 franchise in the biggest television market in the country — at the exact moment the value for sports franchises was about to take off? To put it another way, was George Steinbrenner a good businessman, or just a lucky one?”

Nocera references Bill Madden’s mediocre biography Steinbrenner: The Last Lion of Baseball, a recent New York Times best seller. By far the most interesting portions of the book are of Steinbrenner’s earlier pre-Yankee years, and the first years he spent as owner, up to the Bronx Zoo period of the mid to late 1970s. It’s probably not a coincidence that those are the areas where Madden had to do the most research, and was able to draw from previously unearthed tapes Gabe Paul made about Paul’s time with the Yankees in that early period.

The rest of the book is a slapdash gallop through the most recent three decades of Yankee history, with Steinbrenner’s relationships with certain players and entire seasons getting short shrift along with other episodes of Steinbrenner’s life. One gets the impression that for the years he’s spent covering the Yankees, Madden is content to let the perspective of whoever his best source happened to be at the time color the way he presents that era. On the non-baseball front, it would have been interesting to hear from Seinfeld principals about working with Steinbrenner on scenes he taped for the series that never appeared, and to know Steinbrenner’s reaction to their shelving.

The circumstances surrounding Steinbrenner’s ban from the game by Fay Vincent are recounted in detail, with probably more information about the Steinbrenner/Dave Winfield/Howie Spira affair than has ever been gathered in one place outside a courtroom. The former commissioner Vincent is portrayed as unpleasantly as anyone in the affair, and gives a good perspective on just why the owners couldn’t keep Vincent in charge.

If I was giving letter grades, the Madden bio would get a C+. For anyone interested in Steinbrenner, it’s the most comprehensive book available, but you finish with very little understanding of Steinbrenner as a man in full. He’s still waiting for his definitive biographer – someone with the abilities of David Maraniss or the late David Halberstam.

2 Responses to Could George have made it anywhere?